“The presence of heavy metals, especially four big ones such as lead, arsenic, cadmium and mercury, in produce is an area of concern that we aim to check through regular monitoring, like in case of pesticides,” FSSAI CEO Pawan Agarwal said.
In a recently released result of the food and beverages samples analysed last year, the FSSAI found that nearly 4% of the 1,00,000 samples analysed by states and union territories were unsafe.
In another survey of raw and processed milk being sold across the country, the food regulator found about 6% of the milk samples to contain Aflatoxin M1, a liver-toxic micro-contaminant, also known as carcinogen.
The food safety regulator has commissioned another pan-India survey to understand the extent of the problem regarding the presence of heavy metals in soil-food crops. The survey was conducted on vegetables to know the contamination pattern across India and its possible sources. The data is still in the process of being collated, and is likely to be released next week.
“The regulator wanted to get a sense of the problem since there have been talks of crops from various riverbeds being mainly contaminated. There are also experts suggesting that air pollution is resulting in our produce getting contaminated with harmful metals such as lead. The matter was taken up with the ministry of agriculture,” said Agarwal.
According to experts, prolonged exposure to these heavy metals could even damage organs.
“A person would usually suffer from chronic condition rather than symptoms related to acute metal toxicity,” said Dr Suranjit Chatterjee, senior consultant, internal medicine, Indraprastha Apollo Hospital. “The focus should be to prevent contamination so that experts can look at how best to minimise the effect. The idea is to create a safe food ecosystem in the long run.”

The Food Safety and Standards Authority of India (FSSAI) has given its stamp of approval to ‘En-Ripe’, an ethylene gas encapsulated powder developed by a city-based startup, as a safe method for artificial ripening of mangoes.

The Indian Institute of Chemical Technology (IICT) declared it acetylene-free in its report last year, said Pramod Kumar Mamidi Reddy, director of Heighten Innovative Solutions that manufactures the innovative product. “It ripens fruits without any dangerous chemical effects, and will be a game-changer for farmers producing mangoes and bananas in particular,” he said at a press conference here on Tuesday.
The powder contains vegetable starch extracted from bananas, coir pith and activated charcoal to attract moisture for ethylene release.
“One sachet costing ₹25 would be enough for ripening 20 kgs of fruits. All it costs is 50 paise per kg and farmers can themselves ripen and sell the fruits at a higher price in the market rather than depending on traders,” said Madhava Reddy Maddi, managing director of the startup. There is no evidence that genetically modified brinjal will benefit farmers
A month ago, Bt brinjal genetically modified (GM) to resist the brinjal fruit and shoot borer (an insect), was found growing illegally in Haryana. This was a different Bt brinjal from the one developed by the Indian company, Mahyco, in which Monsanto has a 26% stake. Mahyco’s Bt brinjal has been under a moratorium since 2010. Even as the government clamped down on the illegal GM crop, some farmer groups have demanded the release of Mahyco’s Bt brinjal and other GM crops in the regulatory pipeline. It is true that the moratorium was imposed by the then Environment Minister Jairam Ramesh, despite being cleared by the Genetic Engineering Appraisal Committee (GEAC), the apex regulatory body for GM crops. But is Bt brinjal actually ready for release?
The impacts
Before imposing the moratorium, Mr. Ramesh had sought comments from a range of experts and concerned groups on environmental impacts and implications for consumers and farmers. Despite demands from activists and social scientists, the Ministry of Agriculture has not offered evidence that Bt brinjal will benefit farmers. Ironically, the National Institute of Agricultural Economics and Policy Research anticipates that if Bt brinjal performs as Mahyco proposes, brinjal output will increase and retail prices will fall, benefiting consumers far more than farmers. The report ignores the scenario that companies might charge premium prices for Bt brinjal seeds, in which case farmers may not benefit at all.
On biosafety issues, scientific opinion is divided down the middle. While some scientists such as Deepak Pental of Delhi University were in favour of releasing Bt brinjal, others such as the late Pushpa Bhargava, entomologist David Andow of the U.S., and the then Vice-Chancellors of the Acharya N.G. Ranga Agricultural University and the Dr. Y.S.R. Horticultural University highlighted crucial deficiencies in the characterisation of Bt brinjal, and in the environmental impacts assessment. The ecologist, Madhav Gadgil, warned of contamination of India’s diverse brinjal varieties. Biodiversity is critical for nutrition and sustainability, and the government’s own task force on biotechnology (2004) had recommended that no GM crop be allowed in biodiversity-rich areas.
Further, a majority of the technical expert committee appointed by the Supreme Court (in the public interest litigations over GM crops), recommended a ban on genetically modifying those crops for which India is a centre of origin or diversity. Brinjal happens to be such a crop.
Nutrition issues
In terms of nutrition, there seem to be some significant differences between Bt and ordinary brinjal. Many health researchers and professionals, and scientists such as immunologist David Schubert of the Salk Institute, U.S. and Suman Sahai of Gene Campaign have argued that Bt brinjal poses risks to human health. M.S. Swaminathan and V.M. Katoch, then the Director General of the Indian Council of Medical Research, asked for long-term (chronic) toxicity studies, before taking any decision on Bt brinjal. Further, they asked that these be conducted independently, instead of relying exclusively on Mahyco for data.
Bt brinjal found no support from State governments. Kerala and Uttarakhand asked for a ban on GM crops. States with substantial brinjal cultivation, i.e. West Bengal, Odisha, Bihar opposed the release pending rigorous, extensive testing. As did Chhattisgarh, Tamil Nadu, Karnataka, Madhya Pradesh, and undivided Andhra Pradesh. These States were ruled by parties across the political spectrum. In 2012 and 2017, respectively, the Parliamentary Standing Committee on Agriculture and the Committee on Science & Technology, Environment and Forests assessed the GM controversy. Both committees expressed grave concerns about lapses in the regulatory system. In fact, the Committee on Agriculture was so alarmed by the irregularities in the assessment of Bt brinjal, that it recommended “a thorough probe by a team of eminent independent scientists and environmentalists”, which never happened. Further, both committees endorsed labelling GM foods to protect a consumer’s right to know. However, since retailing is largely unorganised, enforcing truthful labelling is a logistical nightmare, and the Ministry of Agriculture believes it is impractical. The Food Safety and Standards Authority of India has only recently begun putting labelling rules into place.
No scientific consensus
In sum, there is a moratorium on Bt brinjal because there is no scientific consensus on its safety and efficacy, and because the States and Parliament have profound misgivings about the regulatory system. In recent years, pests have developed resistance to Bt cotton, forcing farmers to spray lethal pesticides. This led to over 50 deaths by pesticide-poisoning in Vidarbha in 2017. A GM-based strategy of pest control is unsustainable, all the more so since farmers, already pressed for land, ignore the government’s recommendation to plant refuge crops.
We cannot wish all these concerns away simply because some farmers want to try Bt brinjal, or farmers in Bangladesh have been cultivating Bt brinjal since 2013. Farmers do not and cannot assess long-term impacts on ecology and health, which needs more rigorous and sensitive studies than those conducted so far. Yet, in the nine years since the moratorium, there has hardly been any progress toward addressing these issues. If anything, the problem of sustainable, remunerative farming has become more acute, and alternative strategies such as organic and zero budget natural farming, which do not allow GM seeds, are gaining ground.
At the very least, the government must detail the steps it has taken since 2010 to address the scientific lacunae, clarify precisely how Bt brinjal will benefit farmers, put the infrastructure to ensure labelling into place, and demonstrate how Bt brinjal fits in with sustainable farming and biodiversity conservation. As things stand, Bt brinjal runs counter to the framework for agricultural development and farmers’ well-being devised by parliamentary panels and the government’s own task forces and expert committees.
Aniket Aga teaches environmental studies at Ashoka University and is writing a book on the science and politics of GM food crops in India. E-mail: aniket.aga.2016@gmail.com

Like Loading...
By PesPro
Panaji:
Fruit ripening chambers can help consumers acquire healthy produce and save traders who resort to harmful practices from the authorities punitive action.
“Ripening fruits by using chemicals is illegal and harmful to those who consume them,” Jyothi Sardessai, director, food and drugs administration (FDA) said at the third biennial Dr Anand G Naik Kurade seminar on “Fruits and vegetables: Food or poison,” in the city. She added that some are ripening fruits near Goa’s border to evade action initiated by FDA against such methods.
The Food Safety and Standards Act, 2006, empowers FDA inspectors to impose and recover fines on the spot and also seize and confiscate fruits and food items, a paradigm shift from filing cases in courts against food adulteration. These measures have helped in curbing artificial ripening of fruits, such as bananas, chikus, mangoes and apples, she said.
The FDA director also explained why artificial ripening fruits using calcium carbide or by spraying with, or dipping in, ehtrel or ethephon is bad. The food safety and standards authority of India (FSSAI) has a mobile app for public complaints about substandard food.
Roland Martins, coordinator of Goa Consumer Action Network (GOACAN) pointed out the menace of fruit and ornamental plants being sold by unregistered vendors on pushcarts.
Agriculture minister Vijai Sardesai said he would enforce the Goa Fruit and Ornamental Plants Nursery (regulation) Act 1995. Madhav Kelkar, managing director, Goa State Horticultural Corporation Ltd, said that the corporation obtains the best possible vegetables for consumers, but their quality is affected by rain. The seminar was anchored by Miguel Braganza, chairman, Goa Chamber of Commerce and Industry (agriculture). 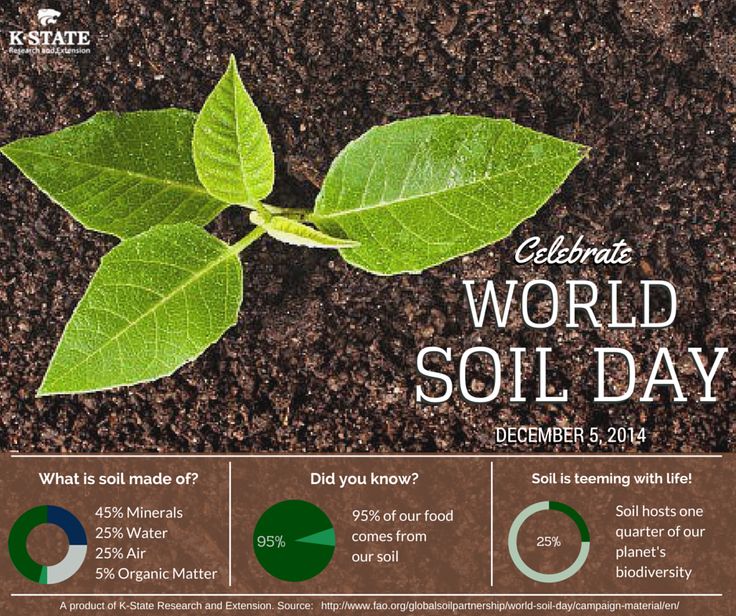 According to the Food and Agriculture Organization of the United Nations (FAO):

2017 Theme: ‘Caring for the Planet starts from the Ground’

Soil is the upper layer of earth, a mixture of organic and inorganic matter, in which plants grow.

It is a finite natural resource. On a human time-scale it is non-renewable. However, despite the essential role that soil plays in human livelihoods, there is a worldwide increase in degradation of soil resources due to inappropriate management practices, population pressure driving unsustainable intensification and inadequate governance over this essential resource.

How you will celebrate Soil Health Day /

World Soil Day is celebrated annually on the 5th of December at the Food and Agriculture Organization of the United Nations (FAO) headquarters in Rome, the regional offices and through national and local events. 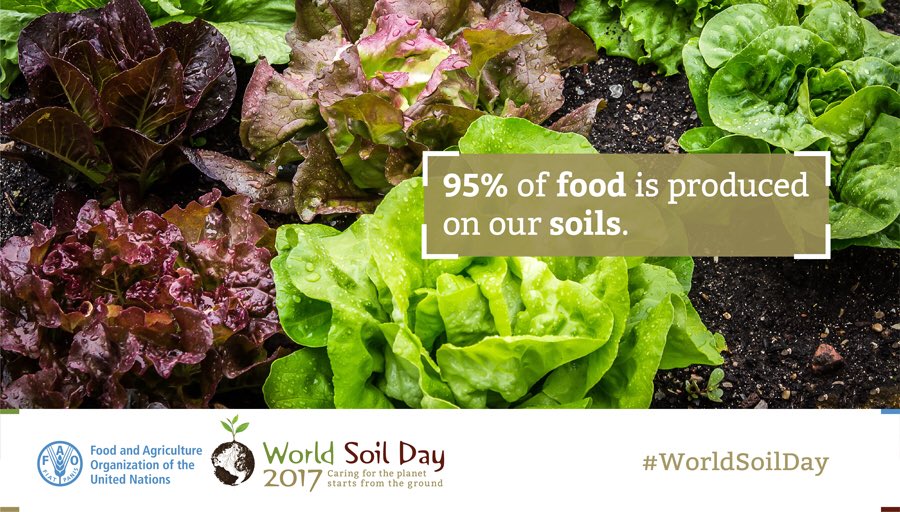 MADISON, Wis. (AP) — Wisconsin agricultural and consumer protection officials are warning about the safety of food grown in flooded fields.

Specialists say flood water contains pathogens, chemicals or both, which can contaminate produce directly or indirectly. Food safety spokesman Peter Haase at the Department of Agriculture, Trade and Consumer Protection says if flood water has touched the produce it shouldn’t be sold or consumed.

Producers who use well water to wash produce before it’s sold should also pay attention to the condition of their well. Contamination can occur if flood water enters the top of the well or migrates underground to your well from a neighbor’s flooded well.